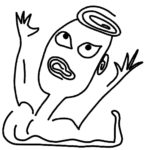 Belief is the mental process experienced by a person who adheres to a thesis or hypothesis, so that he considers them as truth, regardless of the facts, or the absence of facts, confirming or refuting this thesis or hypothesis. So beliefs are often certainties without evidence.

In this sense it is opposed to the notion of critical spirit, and finds its antithesis in instrumentalism which considers that scientific models are only instruments allowing us to conveniently conceive of phenomena.

Science is a collective production built on experimentation, epistemology and constitutes a unity thanks to a permanent connection and confrontation with empirical “reality”.
Science must regularly question its content and maintain a coherent network of knowledge, by publishing research work.

Adherence to scientific theories, by competent scientists, is based on the possession of means of verification and refutation provided by the publications.
It is therefore a completely different mechanism from that of adherence to beliefs, insofar as the position, admittedly ideal, of the scientist, is not to believe in his theory but on the contrary to admit it. constantly researching its possibilities of falsehood.

Karl Popper illustrates this attitude thus: “Scientists try to eliminate their false theories, they try to make them die for them. The believer – whether animal or man – perishes with his false beliefs ”

Thus, if the cognitive mechanisms governing adherence to the scientific theories of a user are those which are applicable to any belief as a disposition to act, the application of the rigorous scientific approach pushes the individual to abandon any tendency to dismiss the doubt. Bertrand Russell introduces on this subject the notion of “emotion” of belief, which according to him must be excluded from epistemology: “emotion is not a relation with the objects of belief, but a new mental fact , perhaps caused by belief, but entirely distinct from it.

It would seem that its intensity is not really proportional to our certainty, but to the energy with which we repel doubt ”.